The God of Cookery

The God of Cookery, a brilliant chef who sits in judgement of those who would challenge his title, loses his title when a jealous chef reveals him to be a con-man and humiliates him publicly. As this new chef takes on the God of Cookery’s role, the former God tries to pull himself back on top again, to challenge his rival and find once and for all who is the true God of Cookery. Turkey and her rival street vendor, Goosehead (Lee Siu-Kei), conduct gang warfare to see which vendor can sell the two best-selling dishes: beef balls and “pissing” shrimp. Chow manages to unite the two rival vendors by combining the two dishes into a new dish, “Pissing Beef Balls”, which the three of them could sell together. It becomes a huge success, and the vendors convince Chow to enroll in a culinary school in order to reclaim the title he lost, but not before he discovers that Turkey idolized Chow as the “God of Cookery”, and received her scarred appearance after fighting a local gang leader who ruined her poster of Chow. 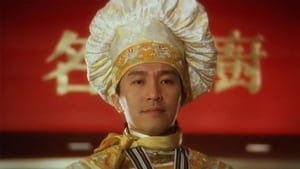